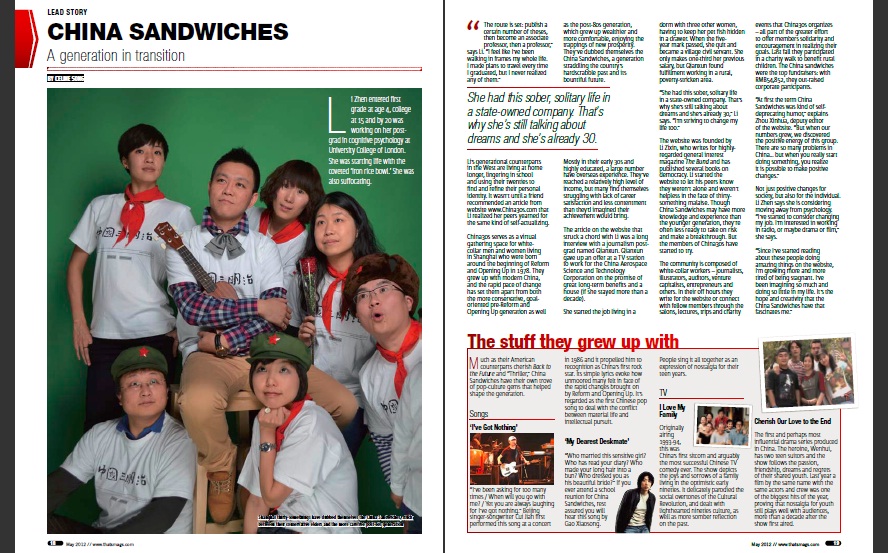 China Sandwiches- A generation in transition

Li Zhen entered first grade at age 4, college at 15 and by 20 she was working on her post-grad in cognitive psychology at University College of London. She was starting life with the coveted ‘iron rice bowl.’ She was also suffocating

“The route is set: publish a certain number of theses, then become an associate professor, then a professor,” says Li. “I feel like I’ve been walking in frames my whole life. I made plans to travel every time I graduated, but I never realized any of them.”

Li’s generational counterparts in the West are living at home longer, lingering in school and using their twenties to find and refine their personal identity. It wasn’t until a friend recommended an article from website www.China30s.com that Li realized her peers at home yearned for the same kind of self-actualizing.

China30s serves as a virtual gathering space for white-collar men and women living in Shanghai who were born around the beginning of Reform and Opening Up in 1978. They grew up with modern China, and the rapid pace of change has set them apart from both the more conservative, goal-oriented pre-Reform and Opening Up generation as well as the post-80s generation, which grew up wealthier and more comfortable, enjoying the trappings of new prosperity. They’ve dubbed themselves the China Sandwiches, a generation straddling the country’s hardscrabble past and its bountiful future.

Mostly in their early 30s and highly educated, a large number have overseas experience. They’ve reached a relatively high level of income, but many find themselves struggling with lack of career satisfaction and less contentment than they’d imagined their achievement would bring.

The article on the website that struck a chord with Li was a long interview with a journalism post-grad named Qianxun. Qianxun gave up a stable offer at a TV station to work for the China Aerospace Science and Technology Corporation on the promise of a Beijing Hukou (permanent resident permit) after five years.

She started the job living in a dorm with three other women, having to keep her pet fish hidden in a drawer. When the five year mark passed, she quit and became a village civil servant. She only makes one-third her previous salary, but Qianxun found fulfillment working in a rural, poverty-stricken area.

“She had this sober, solitary life in a state-owned company. That’s why she’s still talking about dreams and she’s already 30,” Li says. “That’s what I’m striving to do.”

The website was founded by Li Zixin, who writes for highly-regarded general interest magazine The Bund and has published several books on democracy. Li started the website to let his peers know they weren’t alone and weren’t helpless in the face of thirty-something malaise. Though China Sandwiches may have more knowledge and experience than the younger generation, they’re often less ready to take on risk and make a breakthrough. But the members of China30s have started to try.

The community is composed of white-collars – journalists, illustrators, auditors, venture capitalists, entrepreneurs and others. In their off hours they write for the website or connect with fellow members through the salons, lectures, trips and charity events that China30s organizes – all part of the greater effort to offer members solidarity and encouragement in realizing their goals. Last fall they participated in a charity walk to benefit rural children. The China sandwiches were the top fundraisers, with RMB54,852 they out-raised corporate participants.

“At first the term China Sandwiches was kind of self-deprecating humor, explains Zhou Xinhua, deputy editor of the website. “But when our numbers grew, we discovered the positive energy of this group. There are so many problems in China… but when you really start doing something, you realize it is possible to make positive changes.”

Not just positive changes for society, but also for the individual. Li Zhen says she is considering moving away from psychology, “I’ve started to consider changing my job. I’m interested in working in radio, or maybe drama or film,” she says.

“Since I’ve started reading about these people doing amazing things on the website, I’m growing more and more tired of being stagnant. I’ve been imagining so much and doing so little in my life. It’s the hope and creativity that the China Sandwiches have that fascinates me.”

Much as their American counterparts cherish Back to the Future and “Thriller,” China sandwiches have their own trove of pop-culture gems that helped shape the generation.

I’ve been asking for too many times / When will you go with me? / Yet you are always laughing for I’ve got nothing. Beijing singer-songwriter Cui Jian first performed this song at a concert in 1986 and it propelled him to recognition as China’s first rock star. Its simple lyrics evoke how unmoored many felt in face of the rapid changes brought on by Reform and Opening Up. It’s regarded as the first Chinese pop song to deal with the conflict between material life and intellectual pursuit.

Who married this sensitive girl? Who has read your diary? Who made your long hair into a bun? Who dressed you as his beautiful bride? If you ever attend a school reunion for China Sandwiches, rest assured you will hear this song by Gao Xiaosong. People sing it all together as an expression of nostalgia for their teen years.

I Love My Family

Originally airing between 1993-94, this was China’s first sitcom and arguably the most successful Chinese TV comedy ever. The show depicts the joys and sorrows of a family living in the optimistic early nineties. It delicately parodied the social overtones of the Cultural Revolution, and dealt with lighthearted nineties culture, as well as more somber reflection on the past.

Cherish Our Love to the End

The first and perhaps most influential drama series produced in China. The herione, Wenhui, is the has two teen suitors and the show follows the passion, friendship, dreams and regrets of their shared youth. Last year a film by the same name with the same actors and crew was one of the biggest hits of the year, proving that nostalgia for youth still plays well with audiences, more than a decade after the show first aired. 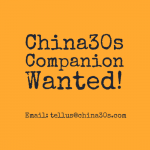